In my previous post, I experimented with the new const keyword which you can use to create constants in JavaScript. Along with var and const, we’ll soon have a third way to declare values in JavaScript: the let keyword.

Like var, you’ll use let to create variables (not constants). You might be wondering why we need two ways to create variables. Well, let differs from var in one very important way: let is scoped differently from var. Let’s take a closer look at what that means.

For instance, in the following code:

When you call pets() you’ll see:

That means that the cat variable exists in the line above where you declare it! We know it exists because we don’t see a reference error.

Side note: to see a reference error, simply change the variable cat to zebra in the line where we are calling console.log:

In this example, the variable zebra really doesn’t exist at all, so we see the reference error.

What happens with var is something called hoisting. When you write code like our pets function above, the cat variable is hoisted, so it’s as if you wrote pets like this:

This hoisting happens even when you declare a variable within a block in a function, like this:

Call pets, and you’ll see exactly what we saw before, that cat is undefined. Weirder still, you’ll find that cat is declared even if the code where you declare it never gets executed at all:

Notice here that even though the if block is never executed, when we display the value of cat in the console, we get undefined and not a reference error.

This all happens because the scope of cat is the entire pets function. If you imagine a scope being like a rectangle you draw around the code that defines the scope, the scope of the variable cat looks like this: 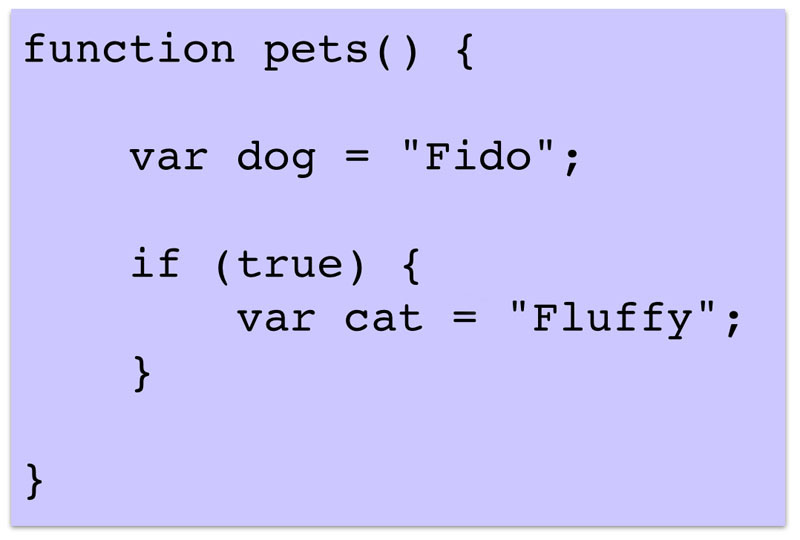 let changes all this. With let, your variables are no longer declared before the flow of execution gets to the statement that declares them. So if you replace var with let in the first version of pets:

In other words, the variable cat is not visible above where it is declared, like it was when we declared it with var. This behavior is a bit more intuitive (it’s weird to think of variables being declared above the statements that declare them), and it’s a lot easier to understand for programmers coming to JavaScript from other languages where this kind of scoping is the norm.

let also means we now get block scoping, too. With var, as you’ve seen, if a variable is declared inside block nested within a function, the scope of that variable is the entire function, even though you might more intuitively think that the scope of the variable should be limited to the block. That means you can access the value of cat after the block in which it’s declared and defined has completed executing:

Again, this is because var has function scope, not block scope; a bit weird for anyone used to a language like, say, Java.

Now, we cannot access the variable cat outside the block in which it’s declared; when we try, we get a reference error.

You can visualize the scope of cat declared with let like this: 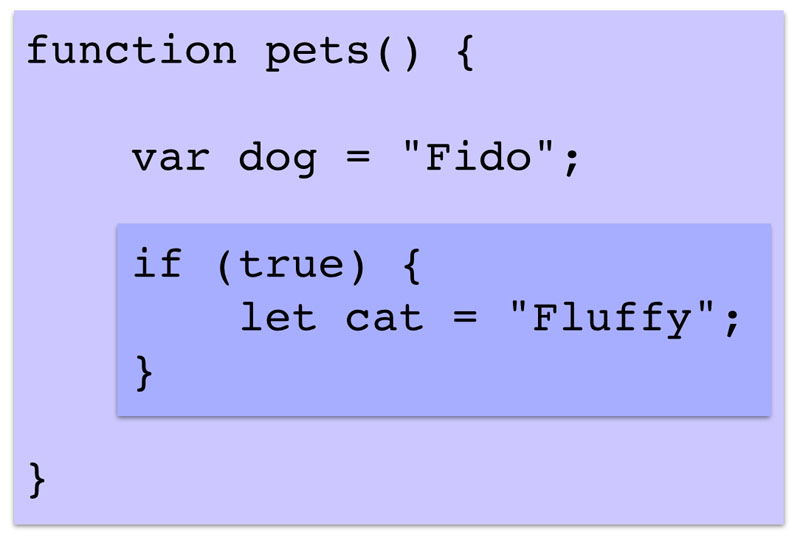 The scope of cat in this example is a box drawn around the if block, and this scope is nested inside the scope created by the pets function, which is the scope of the variable dog. (Finally, Fido gets a mention!)

So, two important things to remember about let so far are:

The way let works is a pretty fundamental change about the way variables work in JavaScript (although note that var is not going away! We don’t want to break the web…). Now, you might think it’s not that big of a deal, but let has quite a few implications, from the more obvious (the use cases we’ve looked at so far) to the more subtle.

For instance, let’s take a look at using let with a for loop:

In the second for loop, we’re declaring a variable j to use as the loop variable, but this time we’re using let, so the scope of j is limited to the for loop itself. Let’s test that out:

So where we attempt to display the value of j after the loop block has completed, we get a reference error.

Using var or let in a short loop block like this doesn’t make much of a difference most of the time (unless you’re counting on using a loop variable, like i outside of the loop block, which would be a bad idea in general), but let’s take a look at an example where this makes a big difference:

(If you’d like to try this code, you can download it from github along with the HTML and load it into your browser.)

This version of the code uses var. When you run this code, you’ll see a web page with a button “click me”. When you click the button, you’ll see three <div> elements appear:

Now try clicking on each <div> element. You will see the same message in the console each time:

I’ll quickly walk through the code, and then we’ll change the var to let so you can see the difference: 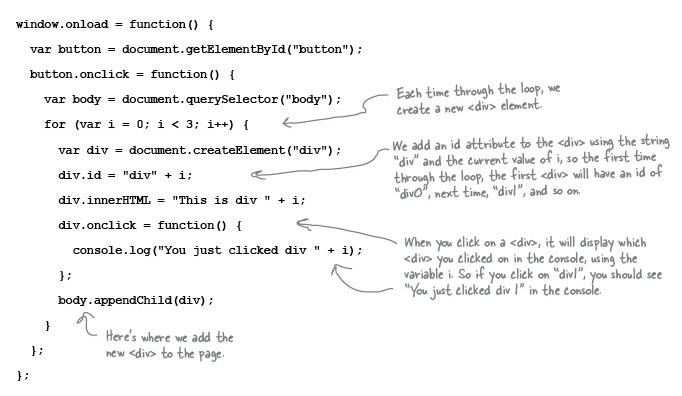 So, why doesn’t this work? Why do we see “You just clicked on div 3” no matter which <div> we click on? The problem is that each closure has a reference to an environment, and because i has function scope, the environment for all three of the closures is the same! The environment is the function scope. Here’s what that looks like: 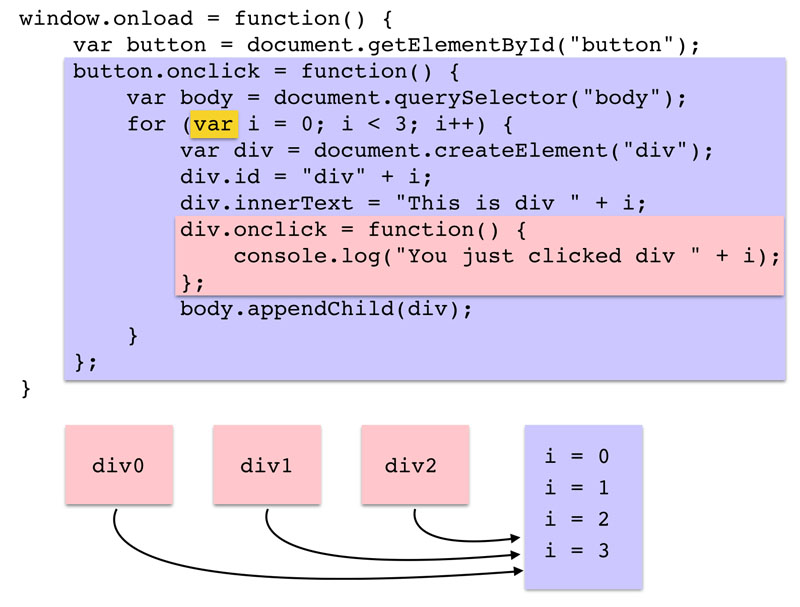 Now let’s look at what happens if we change from var to let when we declare i:

Make this change and reload the page and click on the button. The page will look exactly the same: you’ll see three <div> elements appear, with ids “div0”, “div1”, and “div2”. But, now click on each of the <div>s and you should see three different messages in the console:

(To try this yourself get the code from github).

Now, the code is working perfectly! One small change makes all the difference in the world… So how does it work?

The trick is that because let creates block scope in the for loop, each time we go through the loop a new scope is created. That means, each time you create a new closure with the click handler for each new <div> object, a different environment for the closure is created, and each environment has a different value for i: 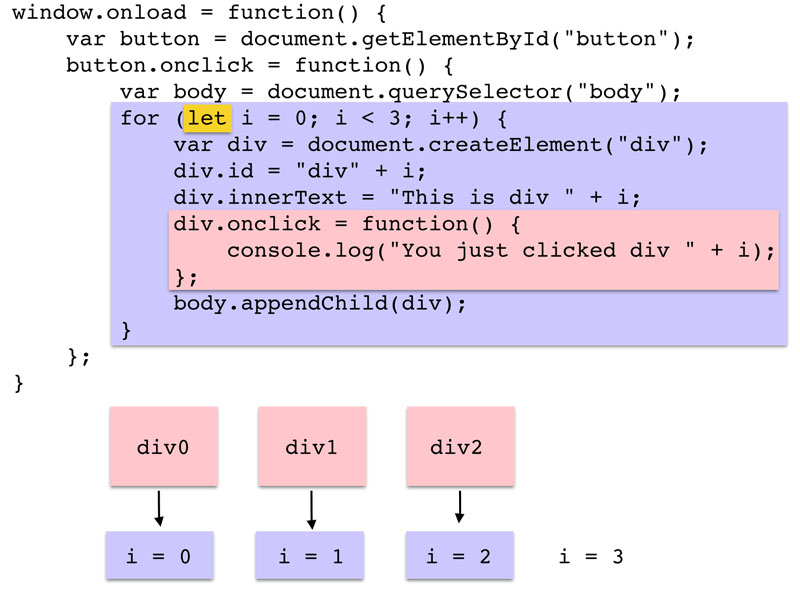 So, when you click on a <div> element in the page, the value of the free variable i is looked up in the closure, and this time, it’s correct. It’s correct because each closure captures the individual block scope that was created for that one time through the loop.

Now, sometimes you might want the environment for the closures you create in a function to be shared, like when we used var to declare i, but sometimes you’ll want each closure to have a separate environment, like when we used let to declare i. Now you know how var and let work, and how closures work, you’ll be able to make an informed choice! And, just to link back to the previous post again, note that const is scoped the same way as let.

Keep in mind that let is not fully supported in browsers yet (as of this writing). Keep your eye on the ECMAScript 6 compatibility table for browser support in the future, and in the mean time you can use a transpiler, like Traceur to translate your code that uses let to ECMAScript 5 code that simulates let (and does so remarkably well!). To use Traceur, all you have to do is link to it in the <head> of your document. Check out the code for the let example on github to see how to do this.